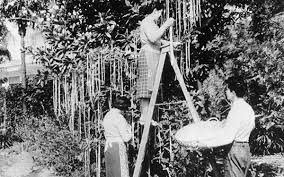 April Fool’s Day, the day dedicated to practical jokes and hoaxes, is traditionally celebrated on April 1st in many western countries, but in some of them, including Italy, it is called ‘April fish’ and that is also the expression used to reveal the prank to the victim.

There are no certainties about the origins of the April fish, and there are many theories about it. According to some, it would refer to when, at the beginning of spring, fishermen were going out for the first fishings of the year and, upon returning in the port empty-handed, they were mocked by their fellow villagers.

Others think that the popular expression is connected to the naivety of those who fall for the joke, in the same way, fish get caught in the fishermen’s nets. Indeed, in Italy, one of the most common pranks on April 1st is that to stick a piece of paper cut in the shape of a fish to the back of the victim of choice.

Through the years many famous April Fool’s jokes have been played also by the media, and the most famous of all was organized by the BBC. On April 1st, 1957, it broadcast a short documentary entitled ‘The Swiss Spaghetti Harvest‘, during the “Panorama” television news program. The piece reported the news a mild winter cause an exceptional spaghetti harvest in Italian Swiss Canton of Ticino. The audience heard Richard Dimbleby, a highly respected speaker, discuss the details of the spaghetti harvest while showing images of a family who picked their pasta from spaghetti trees and placed it in baskets. As soon as the broadcast ended, the BBC began receiving hundreds of calls from viewers who wanted to know how to grow spaghetti trees.