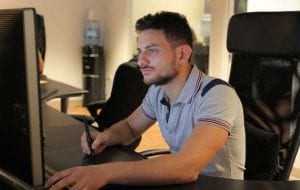 Nemolato, graduated from art school 7 years ago and immediately after he left Italy to move to the US. After attending the Gnomon School of Visual Effects in Los Angeles, he started to obtain one job after the other. He worked on: ‘Westworld’ and ‘Shadowhunters’ series, ‘Once upon a time’, ‘Independence Day 2’, ‘The Conjuring’, ‘The Hunger Games: Mockingjay’ (Parts 1&2), ‘Maleficent’, ‘Dawn of the Planet of the Apes’, ‘X-Men: Days of Future Past’, ‘Falling Skies’, ‘Supergirl’, and ‘Game of War’ to mention a few.

About the work on Charlie – as Del Toro and the rest of the crew affectionately referred to the humanoid amphibian on the set of ‘The Shape of Water’ – Nemolato said: “I was called to work on the project by Shane Mahan, with whom I had already worked on other projects at Legacy Effects – the special effects studio -. After working with the colors for the creature’s face, I started working directly with Del Toro who gave me his suggestions on the work to be done. When I was called for the project, Legacy Effects was already working on the creature’s full-size sculpture, and they needed someone to take care of colors, details, eyes, scars and the bio-luminescence of the creature.” 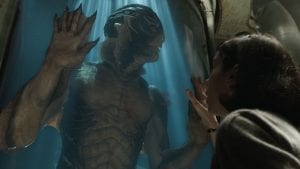 “The work of the concept artist is a team work of loners – explains Nemolato – You are responsible for proposing your own ideas but often you are not the only ones working on the same subject. You are part of a team of artists who separately create different ideas to be proposed to the client. It may happen that different artists’ ideas get combined, at which point the design can be considered the result of group work.”