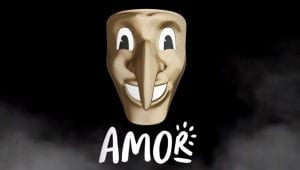 Philippe Starck, from Paris, is the most famous designer in the world, also thanks to the four restaurants that he designed for Massimiliano and Raffaele Alajmo – the starred brothers of Le Calandre – including the bar in Corso Como 10, which in the 90s became a symbol of Milan. Now he transformed that same bar into ‘Amor‘, a “fast-casual” restaurant, as the trio defined it, that will serve the famous steamed pizza created by Massimiliano Alajmos.

The restaurant was designed by Starck is full of light and with a modern decò, inspired by a Venetian spirit that is underlined by the logo, which recalls the mask of the Venice Carnival. In the intentions of the Alajmos, Amor targets Milanese office workers with the aim to alleviate their hectic life with designer dishes. Compared to other locations of the starred Alajmo group, it has a decidedly more informal menu.

According to Starck “The restaurants of Max and Raffaele Alajmo – Le Calandre and Caffè Quadri in Venice – are wonderful but suitable for wealthy clients, so we wanted to experiment with an idea in line with my democratic design.” The heart of the gastronomic proposal will be the famous steamed pizza. Starck continues: “In all places of the world there are alternative versions of pizza. American, Hawaiian, French. Venetian pizza did not exist. Massimiliano Alajmo has created one, steamed. Which, like many things in his cuisine is light and healthy, cooked under a steamed cloche that guarantees the lightness of a cloud. A democratic food that begins with Max’s search for the quality.” The restaurant will be open every day of the week, from breakfast to dinner.

The Alajmos, from Padua, currently have eight locations in Padua, Venice, and Paris – restaurants, cafes, and bistros. Three of these are starred, for a total of 5 Michelin stars, and their ‘Le Calandre’ ranks 29th among the 50 Best Restaurants in the world. Recently they also restored ‘Caffè Quadri’ in Piazza San Marco, in Venice, again with the support of Starck.