Amatriciana to be registered under the Traditional Speciality Guaranteed scheme

There is a need to protect Amatriciana, the typical pasta sauce from central Italy, from the Italian sounding phenomenon. With this aim, the European Union (EU) accepted a request for the registration of its recipe under the Traditional Speciality Guaranteed (TSG) scheme. The EU has just published the request in the Official Journal of the European Union (OJEU). Those who want to raise objections to the registration will have three months to do so. In the absence of reservations and objections, the procedure will go ahead in February. The recipe will obtain three different seals: Protected Designations of Origin (PDO), Protected Geographical Indications (IGP), and Traditional Specialties Guaranteed. 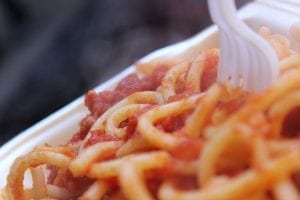 Only the preparation made with the ingredients and the cooking method traditionally used will obtain the logos. The OJEU entry specifies the original recipe’s characteristics. It must contain between 18% and 30% of Amatriciano cheek lard; the pecorino cheese must be Amatriciano or Romano DOP; it must contain between 69% and 81% of tomato puree or peeled chopped tomatoes. The use of “ingredients such as garlic, onion or bacon” is prohibited, while pepper and chili pepper may be added.

These are peculiarities of the recipe as it is prepared in the Monti della Laga area, the place where traditionally this historic Central Italian dish was born.

Thus, the registration recognized that the population of Amatrice devised to one of the most well-known dishes of the Italian tradition. And it did so, in the 1800s, by enriching an ancient rural preparation, with the introduction of tomato. Moreover, the EU in this way acknowledges the role this recipe acquired in recent years becoming  a symbol of the recovery of an entire territory after the earthquake of 2016.