All the stars of the 2020 Michelin Guide Italy 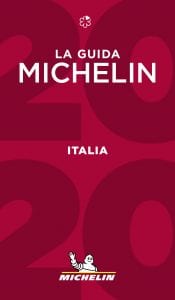 The 65th  edition of the Michelin Guide Italy is out. And Italy, with a total of 374 starred restaurants is confirmed as the second most starred country in the world. The Belpaese has 33 new starred restaurants. Among the most prestigious restaurants with 3-stars, the Guide lists for the first time the Enrico Bartolini’s Mudec in Milan.

Enrico Bartolini won his first star in 2010 at Le Robinie and then in 2011 at the Devero Restaurant, the second one in 2014. At Mudec, in 2017, he confirmed the second star and today earned the third one bringing the 3-stars back to Milan after 25 years. The Guide motivated the 3-stars to Bartolini saying that, “at the Mudec, the chef’s personality stands out for research and experimentation; harmonizing perfectly with Milan’s dynamism and giving an artist’s touch to the rich Italian gastronomic heritage.”

In the 2020 Guide, all the other 3-stars have been confirmed. Thus, the restaurants “worth the trip”, and the 3-stars, are: Piazza Duomo in Alba (CN), Da Vittorio in Brusaporto (BG), St. Hubertus, in San Cassiano (BZ), Le Calandre in Rubano (PD), Dal Pescatore in Canneto Sull’Oglio (MN), Osteria Francescana in Modena , Enoteca Pinchiorri in Florence, La Pergola in Rome, Reale in Castel di Sangro (AQ), Mauro Uliassi in Senigallia (AN) and Enrico Bartolini at the Mudec in Milan.

There are two new restaurants among the 35 that are “worth a detour”, i.e. 2-stars. One is Michelangelo Mammoliti’s La Madernassa is in Guarene (CN). Here “the dishes express rigor, technique, and precision, but their soul is the Piedmontese tradition and products.” The other is another Enrico Bartolini’s restaurant, Glam in Venice, where the chef is Donato Ascani. “His proposal is a solemn synthesis between creativity and instinct inspired daily by local ingredients with Oriental touches and aromatic herbs from the lagoon.”

The restaurants “with high-quality cuisine, which deserves a stop” and 1-star in total 328, 30 of which are new entries.

More than half the newly awarded stars went in Lombardy, Campania, and Tuscany, to which more than 50% of the new stars have been assigned.

Previous Post Argentario, the former island on the Tuscany coast
Next Post Joseph Stiglitz receives an honorary degree at the Festival della Tecnologia in Turin