All about Italy and Lidia Bastianich together for the Italian excellence 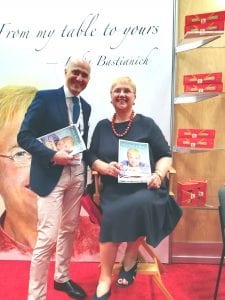 Paolo Del Panta, Editor in Chief of All about Italy, talks about the new publishing project started with the famous businesswoman, chef, and presenter of important TV programs. A magazine of recipes, but also and above all, a tale of Italy.

The editorial group enhances its portfolio with another important project: “Lidia’s Italy at Home”, the new magazine by Lidia Bastianich recently launched in partnership with All about Italy. How did this synergy develop?

Lidia Bastianich is a corroboration: a friend of All about Italy, she is for us the Ambassador of Italianness in a country – and in many other markets- that today sees her as the protagonist of the cuisine. After a mutual involvement in several projects, Lidia chose All about Italy as Italian partner for the advertising of her television program “Lidia’s Kitchen” broadcast in the United States on the national PBS network, with about 4 million viewers per week. This year the collaboration continued, and it was consolidated with this editorial project, which is much more than a simple recipe book: it is the story of Lidia and her memories, of the family of yesterday and today, of an experience lived between Italy and America, which finds its perfect expression and synthesis in traditional dishes. In some ways, it is the narration of the Italian know-how: simple, valuable, and unique. Since its foundation All about Italy has aimed to describe the Italian excellence in all its forms: Lidia’s Italy at Home perfectly follows this trend.

What and who finds space within Lidia’s Italy at Home?

In the magazine, from a content point of view, there are recipes, suggestions, and insights into typical Made in Italy food and beverages, with a window on Italian dishes. On top of culinary tips, food and wine tourism is a strong point: a discovery of the ancient traditions that have made Italian food famous all over the world. The publishing project has been embraced by important companies that have made the history of Italian gastronomy and that found in Lidia the ideal spokesperson to disseminate the values of Italianness abroad. The launch of the first issue took place during the Summer Fancy Food Show 2018 in New York, a unique opportunity in which the players of the sector, as well as the general public, were able to appreciate the novelty of the publication enjoying the presence of its own godmother. The magazine is distributed in a circuit of excellence that includes the 6 Eataly stores in the United States, the vast network of Bastianich’s restaurants, and from the next issue it will also start an extensive subscription campaign through the TV show.

What are the values that link the All about Italy project to Lidia Bastianich’s activities?

When I met Lidia Bastianich for the first time, more than 20 years ago, I found that she is an open-minded entrepreneur, fully convinced of the enormous potential of a multi-channel approach. This makes her the ideal partner and ambassador for walking together bringing managers and companies of the Made in Italy on a path full of ambitious challenges that is a harbinger of surprising results. That’s why collaborating with her has been easy: first of all, we are connected by a deep affection for Italy and by the belief in its resources; consequently, we are united by the will to encourage a culture – not only culinary – that deserves to be deepened and promoted.

In the light of this partnership, what kind of development prospects will the All about Italy platform have?

Following this collaboration with Lidia, woman of business and tradition, we have strengthened the idea of how necessary it is to pursue an economic vision in which the sharing of values and the collaboration between the different production companies become a basic plus for cultivating new opportunities. In this sense, we are committed to expand the services, including digital ones, offered to companies that want to undertake fruitful and lasting relationships with foreign markets. Exchange skills, technologies, ideas, and knowledge are the only possible choices to usher in a new era of well-being. Italy can and must be at the center of global attention, but it must get used to play as a protagonist, aware of its potential and able to pass it on and communicate it as it deserves to be. All about Italy’s platform has been working successfully for over twenty years to make all of this possible, capitalizing in the best possible way on a combination of experience and renewal.