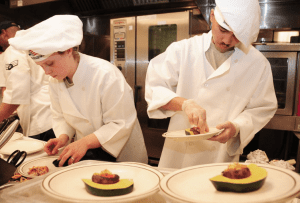 The first phase of the sixth edition of the Chefs’ Cup Contest, competition between starred chefs, started yesterday in Rome and will end in November in Milan, before the grand final that will take place before Christmas. The hotels of the Sina Hotels group – which celebrates its 60th birthday this year – in Rome, Florence, Venice, Perugia, Viareggio, Cortina d’Ampezzo, Romano Canavese (Turin), Parma, and Milan, host the event dinners that feature show cooking and tasting open to an audience of gourmets.

During each of the nine evenings of the contest, that has ‘music’ as theme, two great chefs from all over Italy and, for the first time, from Switzerland, will work together to create two dishes inspired by a melody, a musical genre, or a musician. A different jury of experts for each evening will assign scores according to various parameters: adherence to the theme, couple complicity, taste, quality/price ratio, and aesthetic/artistic value. The two chefs of the couple ranking first, on the basis of the scores obtained, will face each other during the final evening to determine the winner of the Chefs’ Cup Contest 2018. 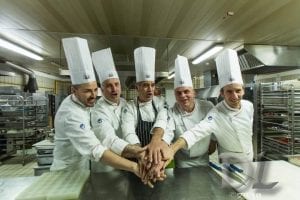 Chefs have maximum creative freedom, allowing them to offer the public sensory stimuli not normally involved in a tasting: the hearing becomes part of the suggestion. In fact, during the tasting of the two dishes, each person will receive headphones with which to listen to the musical theme that inspired them, giving life to a fully immersive dinner. Hearing, smell, touch, taste, and sight: all 5 senses will be involved.

Previous Post Pesaro will open a museum dedicated to Gioacchino Rossini
Next Post Olivetti: 110 years of industry on show in Rome